CharTech Solutions proprietary HTP technology is a key growth area for CHAR. In simple terms, HTP heats materials to high temperatures in the complete absence of oxygen, and with no oxygen, the material can’t burn, it is instead converted into higher value outputs. HTP converts woody-biomass and challenging organic waste streams (manure, sludge, biosolids, digestate and others) into three renewable and valuable outputs: 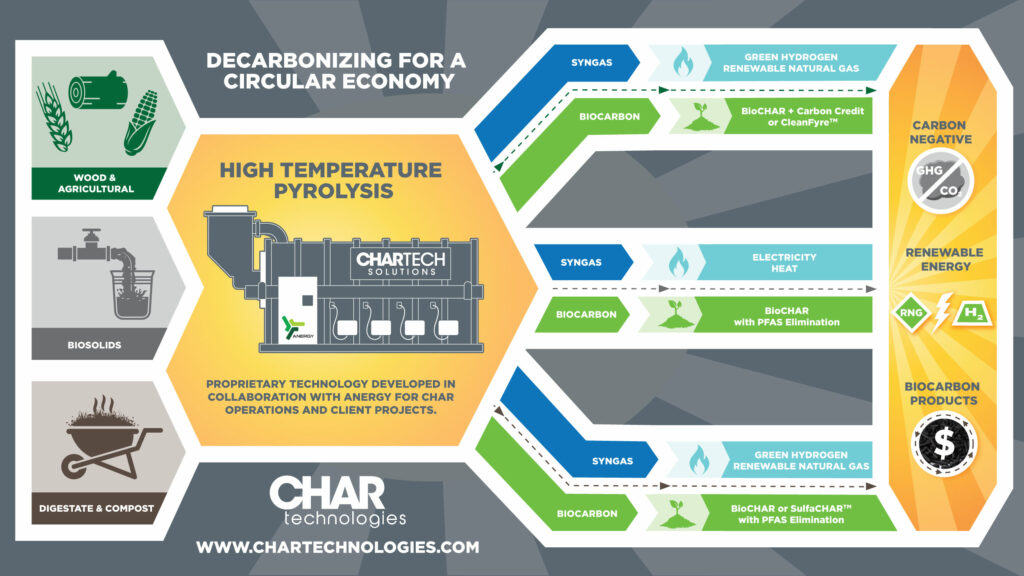 Carbon Negative: High Temperature Pyrolysis systems operate in a closed loop. The system can be integrated into sites to handle organic waste streams to eliminate the associated transportation and management challenges by reducing the total mass by up to 90%. The HTP outputs reduce carbon emissions further by generating carbon sequestering/offsetting biocarbons (biochar), excess heat and renewable energy.

Heat: Once operational, the HTP process is autothermal – it creates its own energy and does not need external heat sources. Several parts of the process generate additional heat, which can be captured to offset various on-site industrial heat load requirements.

Renewable Energy: The HTP process converts a portion of the solid feedstock into a high-quality hydrogen-rich syngas which can be sent directly to a cogeneration engine to generate electricity, purified hydrogen can be separated and distributed as green hydrogen, or the syngas can be converted into pipeline quality renewable natural gas.

Biocarbons (biochar): The remaining solids after the HTP process are converted into a solid carbon product. When used as pollutant filter (activated charcoal, SulfaCHAR) or as a fertilizer additive or soil amendment, these biocarbons not only offset more resource intensive alternatives, but also fix carbon in an extremely stable form, thereby utilizing the natural “carbon capture” processes of the feedstocks, and further sequestering that carbon. When used as a biocoal (CleanFyre) to offset fossil coal used in industrial processes, the CleanFyre allows for the carbon sequestered in the coal to remain sequestered, drastically reducing the GHG emissions of vital sectors such as the steel and cement industries.

Watch a short video on the HTP process here.